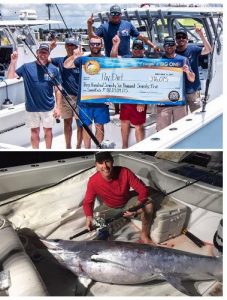 Biloxi, Miss. –- Congratulations go out to fishing contest winner Scott Cothran who won over $350,000 in cash and prizes, after he caught a record-breaking swordfish on the aptly named vessel, “Pay Dirt” during the 2017 Mississippi Gulf Coast Billfish Classic.

Cothran broke the Mississippi state record for largest swordfish when he landed a 242-pound, 8.64 ounce fish. The prior record was a 75-pounder caught in 2007.

In addition to winning $51,075 and a Petro Nissan pickup truck, Cothran scored a grand total of $325K, paid for by Odds On Promotions, in a Records, Rods and Reels (Calcutta) promotion ($100K for catching a record-breaking swordfish, $100K for being on a Freeman Vessel, $50K for using Hilton’s RT Nav, $25K for using March Tacky Carbon product, $25K for using a Poseidon Fishing Rod, and $25K for using Killer Bee product).

Cothran, director of marketing and sales for Freeman Boatworks in Charleston, S.C., said it took plenty of teamwork from all seven crew members aboard the boat, “Catching a fish that size takes a group effort,” he said. “I just happened to be the one on the rod at the time.”

Planning a fishing tournament or other outdoor event and want to increase attendance and participation? Perhaps even have a fishing contest winner of your own? Odds On Promotions can assist you in doubling, tripling or even quadrupling your prize pool. Email or give Odds On Promotions a call today at 888-827-2249.