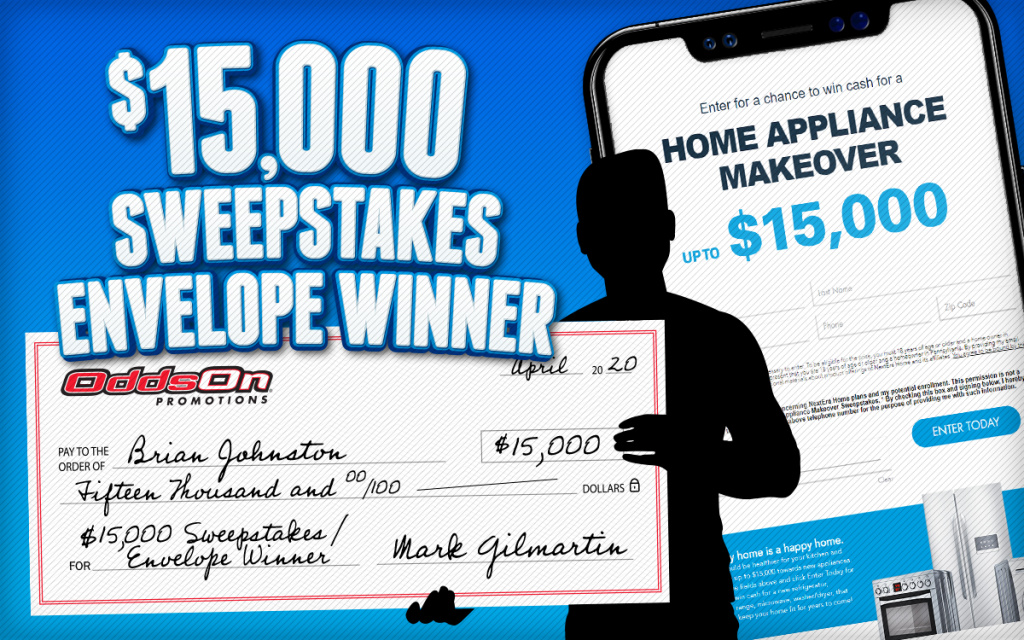 Denver, PA – Think that because there is a pandemic, you need to slow down your marketing efforts? Think again! This April, prize insurance winner Brian Johnston of Denver won $15,000 courtesy of NextEra Home and paid for by Odds On Promotions, in a Home Appliance Makeover sweepstakes promotion administered by Cohen-Friedburg Associates, Inc (CFA).

The Sweepstakes was promoted via social media, and designed to bring attention to NextEra Home’s appliance and home warranty programs. After registering and completing a brief survey, contestants were entered for a chance to be the one lucky finalist who would select one envelope out of 100 Lucky Envelopes in order to win the $15,000 grand prize, insured by Odds On, or a $1,000 consolation prize courtesy of NextEra Home.

On April 18th, Johnston was randomly selected, and due to the constraints of Covid-19, instead of getting to choose a Lucky Envelope at a central location, CFA got creative, sending the envelopes to the contestant’s home. While a CFA Representative watched via live feed on their cell phone, Johnston selected and opened envelope #33 (in honor of basketball great Larry Bird) winning the $15,000 grand prize.

Are you ready to get back to business? Want to have a possible prize insurance winner of your own? Let Odds On help you re-engage your audience and re-capture revenue with online instant win contests as well other promotions designed to help you drive sales. For more information give us a call today at 888-827-2249 or visit our website at www.OddsOnPromotions.com.

The Clean Hands Kiosk is a digital signage display with a built-in automatic hand sanitizer dispenser. It’s great for conveying the message that you care about your customer’s and employee’s health, while at the same time continually advertising your products and services.

The Clean Hands Kiosk is a classy, permanent solution for any and all environments!

CLICK HERE to see a video on how it works.

Holds up to 5 times more than standard dispensers

PAYS FOR ITSELF IN 10 REFILLS COMPARED TO PURELL-STYLE DISPENSER

Wishing you were watching Tiger Woods instead of Tiger King? Well, you’re in luck! Because we’ve got a can’t miss golf putting winner video for you!

See how golf putting winner Michael Meier of Edgewood, Ky nailed an impressive 94-foot putt and won $5,000, courtesy of Barleycorn’s, and paid for by Odds On Promotions.

Meier won the prize at half-time during the Northern Kentucky University men’s homecoming basketball game after he was randomly selected via a registration form, to participate in the Barleycorn’s $5,000 putting contest. He nailed the shot, sending the entire arena into a frenzy and landing the substantial cash prize.

“I have been watching the contestants over the last couple of years and many have gotten so close. The hardwood is so much faster than an actual green so everything has to be in perfect alignment to sink it,” noted Joe Heil, Barleycorn’s owner and longtime NKU Norse basketball sponsor. “This putt had the speed and the accuracy. It was thrilling to watch!”

Are you looking forward to getting back to business? Email or give us a call today to find out how we can help you make the most of your “grand re-opening” for as little as $500. Or, ask us how you can have a chance to have your own golf putting winner!

DeMetro won the big bucks after he was randomly selected via raffle ticket to participate in the half-court shot contest, which took place at half-time during the women’s basketball game against Princeton. After making the prize-winning shot, the fans in Walsh Gymnasium erupted while DeMetro took a few laps around the court, getting hugs and high-fives from staff, students, and the school’s mascot.

According to Matthew Westphal, a marketing graduate student who helped to organize and run the contest, “It was very exciting to have a winner. We hold these contests primarily for our students and they add to the overall game experience. We’ve worked with Linda at Odds On for a variety of programs – including our Morning Madness events. The claims process was straight-forward, and everything went very smoothly.”

Interested in finding out how Odds On Promotions can help you maximize sports sponsorship opportunities, engage your audience, drive traffic and close more sales in any venue? Want to market into the excitement surrounding the NCAA Men’s Basketball Tournament? Thinking about sponsoring or running big prize basketball contest at your next game? Want to have a half-court shot winner of your own? Email or give us a call today at 888-827-2249 or visit our website.

Newport Beach, Calif. – Mountain Mike’s Pizza recently gave football and pizza fans the chance to score $49,000, paid for by Odds On Promotions, in an online to on-field Kick for Cash football skills promotion.

To activate their sponsorship as the Official Pizza of the San Francisco 49ers, as well as drive online and in-store traffic, Mountain Mike’s Pizza gave their customers a chance to win $49,000, paid for by Odds On Promotions, in a field goal kick contest at Levi’s Stadium at halftime during a game against the Green Packers on November 24.

To get a shot at kicking for cash in front a stadium of 70K football fans and winning a VIP game day experience, fans visited the company’s website from September 17 through October 24 and on October 24, a lucky finalist was randomly chosen.|

According to Brian Bartolo, Vice President of db&m Media, the media agency for Mountain Mike’s that helped craft the sponsorship activation program, “Even though the Kick-It with Mountain Mike’s finalist didn’t quite nail the 40-yard grand prize field goal kick, Mountain Mike’s didn’t let him go home empty handed. They awarded him with a $1,000 consolation prize on the field!”

“In our second year as the official pizza partner of the San Francisco 49ers, we wanted to get fans involved in something fun and potentially life-changing with one lucky individual scoring the chance to win $49,000,” says Jim Metevier, President and COO of Mountain Mike’s Pizza, LLC. “Guests have been coming to Mountain Mike’s for over 40 years with friends and family to cheer on their favorite sports teams, and we’re thrilled to provide a once-in-a-lifetime opportunity that even the most diehard football fans can get excited about.”

In addition to the “Kick It with Mountain Mike’s” sweepstakes, the brand launched a deal at the start of the season where pizza fans score 49 percent off any large one-topping pizza whenever the 49ers score. This offer is going on all season long at participating Mountain Mike’s locations and applies to both home and away games.

The promotion generated 10K sweepstakes website visits and over 3200 entries.

Want to learn more about using giant-prize contests to activate sponsorships and put your brand at center field, center court or center ice? Looking for more way to market into the excitement surrounding any sporting event? Email or give Odds On a call today at 888-827-2249.