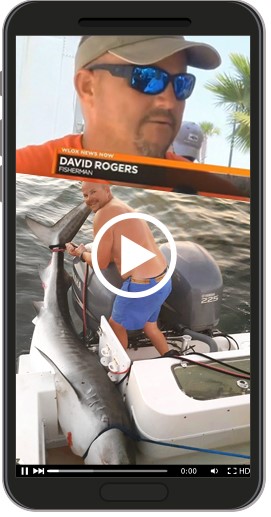 Gulfport, Miss. – Congratulations to David Rogers of Mobile, Ala., our latest fishing contest winner, who not only broke two state records during the 69th Annual Mississippi Deep Sea Fishing Rodeo this summer, he also won $20,000, paid for by Odds On Promotions.

Rogers won the big bucks as part of the Rodeo’s Shark Bounty: if any angler was able to land a state record-breaking Tiger Shark before the scales closed on July 4, 2016, they would win $20,000.

Rogers’ prize winning catch, a 390-pounder, broke – or should we say, annihilated – a six-year record that was set in 2010 for a 173-pound Tiger Shark. He also landed a record setting 203-pound Bull Shark. Even more surprising, he broke both records in a single day!

Check out the amazing press Rogers received for his catch.

Interested in offering participants in your next special event the chance to win a prize for a record-setting performance? Interested in more winning fishing contest ideas? Email or give Odds On a call today at 888-827-2249 to learn more.