Newport, Ky. – Congratulations to Bradley Wolfzorn, who won a two-year lease on a new car from Jake Sweeney Automotive, paid for by Odds On Promotions, after sinking an impressive 94-foot, on-court putt at a Northern Kentucky University men’s basketball game in December.

The on-court putting contest, which is sponsored by Barleycorn’s, gives a randomly selected fan the chance to make a 94-foot putt to score a new ride.

After Wolfzorn was randomly selected at the game, he hit an impressive, fast-moving putt that flew across the BB&T Arena hardwood and through a template placed on the farside of the court.

“The hardwood is so much faster than an actual green, so everything must be in perfect alignment to sink it,” said Joe Heil, Barleycorn’s vice president of operations and longtime NKU Norse basketball sponsor. “This putt had the speed and the accuracy. It was thrilling to watch!”

This was the second winner for NKU and Barleycorn’s insured by Odds On Promotions. Michael Meier of Edgewood, Kentucky won $5,000 for a 94-footer in February of 2020.

Want to put your business at center court this season? Give us a call today to learn about big-prize basketball promotions.

Storrs, Conn. – Imagine the pressure of taking a half-court shot at half-time during a big UConn Women’s basketball game. Now imagine making that shot in front of not only Rebecca Lobo, but Kobe Bryant too. Well, that’s exactly what half court shot promotion winner Asher Iglesia, a full-time student at UConn, did last March. Check out Iglesia’s prize-winning shot!

Iglesia, who was a track and field athlete in high school, won the $10,000 courtesy of Wells Fargo, and paid for by Odds On Promotions, in a half-court shot contest that took place during the women’s basketball game at Gampel Pavilion between the UConn Huskies and Houston Cougars.  And, this wasn’t just “any” basketball game – it was the game at which UConn retired the jersey of Rebecca Lobo.

Iglesia learned about the promotion, which was designed as a student sports loyalty reward program, via email. The more games a student attended, the more chances they got to be selected for a chance to make the prize-winning shot.  After nailing the shot from half-court, Iglesia put his track and field skills to the test, running around the court in celebration.

Give us a call today at 888-827-2249 or send us an email to learn more about the many ways Odds On Promotions can help you get into the game of rewarding customer loyalty and showcasing your brand in any setting, including (but not limited to) a half court shot promotion.

Need a last-minute basketball contest idea for March? Hoop it up during the NCAA Basketball Championship by giving your customers the chance to win $25,000 during every game with Odds On’s Scoreboard Payoff Pull-Tab cards.

You choose two games and if the last digit of each teams’ halftime and final scores match those on the card, your lucky fan will win $25,000, and Odds On will pick up the tab.

Order today and you can distribute cards on opening Thursday & Friday, during the Sweet 16, and of course during those LAST FOUR championship games, all for just $275.

Give Odds On a call at 888-827-2249 for more pricing and info on this basketball contest idea, or visit our website for more basketball promotions!

Looking for the perfect March basketball contest? Give your players the chance to win up to $1,000,000, paid for by Odds On Promotions, in a fully-automated, online bracket prediction promotion.

• Players visit your website to access the customizable game portal, enter their code and fill out their bracket.

• If one of your patrons correctly predicts 63+ games at the end of the tournament, they’ll win your insured grand prize and Odds On will pick up the tab.

This web-based promotion ensures maximum fun for your customers with limited staff involvement.

Looking for more March basketball contest ideas? We have plenty of those too! Give us a call at 888-827-2249 today with any other ideas you might have. 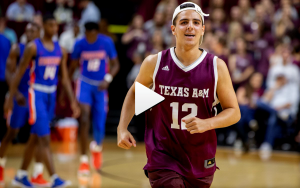 Prahbu was randomly selected during the women’s basketball game, which took place earlier in the evening, to participate in the big-prize timeout promotion. He got three chances to make the half-court shot, draining it on his 3rd and final attempt.

There’s still plenty of time this season to add an exciting, on-court big prize basketball contest to engage your fans and sell more sponsorships. Click for more information or give me a call today at 800-771-0250.