Reno, Nev. – This season a tennis apparel company has rewarded one of their brand ambassadors an impressive performance bonus promotion reward not only once, but twice, after he landed in the finals of two ATP events. 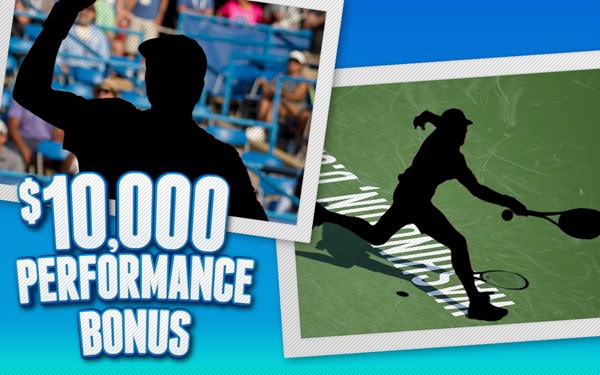 The performance bonus agreement rewards the tennis player cash incentives based upon their placement during a variety of tennis events taking place through December 2021.

But thanks to performance bonus coverage from Odds On, the sportswear company doesn’t need to worry if their ambassador continues to finish well – because Odds On will be there to reimburse them for every qualifying performance between now and the end of the year.

According to Odds On’s Risk Manager, Zak Woodhead, “Performance bonus coverage is a very effective tool for brand marketers, allowing them to offer big incentives to spokespeople, social media influencers and/or brand ambassadors without incurring additional financial risk. It also presents an opportunity for insurance agents to expand their lines of business.”

Are you interested in learning more about how you can utilize a performance bonus promotion to incent and reward your athletes, staff, sales team, customers, or volunteers? Odds On Promotions can help. Email or give us a call today at 888-827-2249.

Looking to hit one out of the park for your baseball and softball sponsors? Want to score big with volleyball and lacrosse fans? How about boosting ticket sales for your Spring Football game – or kick off your 2012 “season ticket” program in million dollar fashion? If increasing fan engagement and sponsorship sales is on your 2012 To Do List then it’s time to pick up the phone and give Linda Thomson, Sports Promotion Specialist with Odds On Promotions, a call!

Baseball & Softball Promotions
Here’s an incredibly affordable promotion that any sponsor is sure to love… a Homer Hole!  Simply position a giant sign – featuring your sponsor’s logo (or even the prize to be won)beyond the outfield wall and if a big hitter can send a ball flying through the target hole on the sign, a lucky fan will win a prize!  Perfect for awarding consolation prizes whenever the sign is hit!
More Baseball

Tennis Promotions
A Perfect Serve contest is a great way to increase attendance at every game all season long. The promotions is simple … if a lucky fan can send the ball through the target template, they’ll win $10K and Odds On will pay for the prize.
More Tennis

Lacrosse Promotions
Give your fans the chance to show off their stick skills and score a brand new car or truck with Odds On’s Net Some Wheels contest. If a lucky fan can throw a ball into the back of a truck or through a customized target, they’ll dria winner and Odds On will write the check. Better still, templates can be customized to suit any sponsor or theme you’d like.
More Lacrosse

To contact Linda Thomson, Sports Promotion Specialist with Odds On, about any of the above promotions — or if you have a promotion idea of your own — feel free to give her a call at 800-771-0250 or send her an email!  Remember: all of our quotes are free and no-obligation!

Reno, Nev – Before the BNP Paribas Showdown last week, Christine Smith from Hurst, Texas got the chance any tennis fan would love – the opportunity to make a $1,000,000 Perfect Serve .

Smith got the chance to win the million-dollar prize after winning the “Racket Up, America” sweepstakes, a collaborative tennis industry effort created to build awareness and stimulate sales by giving anyone who registered at the playtennis.com website or bought a new tennis racket at participating retail locations the chance to win $1,000,000 by making a serve through a target template.

Smith, who registered for the contest in hopes of winning some tennis equipment for her daughter’s school, said, “Lo and behold, what do I win but the grand prize.”

As part of the grand prize package, Smith and her daughter also received a free trip to New York City, a sightseeing tour and introductions to Venus and Serena Williams and Billie Jean King, which made for a winning promotion even though Smith didn’t win the million dollar prize.

According to Zak Woodhead, Risk Manager for Odds On Promotions in Reno, Nevada, “Million dollar insured promotions are very effective in generating PR and generating traffic and sales both online and at retail locations. Even small companies can benefit from register-to-win promotions like this.”

Want to run your own mega-prize promotion? Give us a call at 888-827-2249 to learn more about creating a custom million-dollar contest for your organization.

Men Take a Swing at Guinness World Record, Million Dollar Prize
Milford, Conn. – Isidro Martinez of Stratford and Paul Coorssen of Milford attempted to break the Guinness World Record™ for the longest tennis rally and win $1,000,000, paid for by Odds On Promotions, as part of the 3rd Annual Rally 4 Charity fundraiser at Milford Indoor Tennis. Martinez and Coorssen won the right to go for the record after hitting 5,916 consecutive strokes in a qualifier. While the two men tallied a staggering 6,858 consecutive shots in about an hour and a half, an unofficial world record for such a short time period, it wasn’t enough to beat Rally 4 Charity organizers and world-record holders Angelo and Ettore Rossetti who have set the bar high with a giant 25,944 consecutive strokes.  “Win or lose, it was about the charities,” stated Coorssen, and on that front the event was a success, raising around $10,000, the biggest amount to date.  According to World Record holder and Rally 4 Charity organizer Rossetti, “The million dollar prize did help us to capture more publicity – which is good for the charities as well as for tennis. We were very happy with the service from Odds On Promotions. Zak is always very organized and professional.”