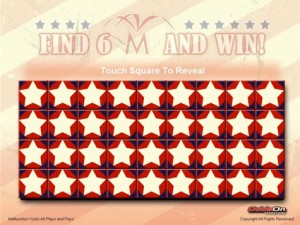 If you’re a casino property, then chances are you’re always on the look-out for hot seat promotions that drive results, are unique to your property and are affordable enough to run on a regular basis.  Which is why I think you’re going to really like this: a custom handheld Video & Scratch and Win hot seat promotion!

Here’s the scoop.  During the month of July at this casino property, players were selected to play a custom Fourth of July-themed  Video Scratch & Win tablet game.  Each randomly selected player selected six spots on the handheld tablet’s touchscreen – if one lucky player happened to reveal 6/6 winning grand prize symbols (which in this case, happen to be ‘fireworks’ symbols coupled with the property’s logo) then they would win cash and free play… compliments of the casino!  Smaller cash prizes and free play were awarded for those who manage to select fewer winning symbols.

According to Brent Kelly, Western Business Development Manager with Odds On Promotions, “I personally love using the handheld tablet as a hot seat promotion.  Here’s why: they are extremely easy use, they’re cost-efficient, you’re bringing the promotion to the player at their gaming position, they are fun to play… and, best of all, they are completely customizable!  If Odds On doesn’t have a stock game you’re interested in, we can create a completely custom game for your property – including a customized ‘faceplate’ to showcase your game.”

Feel free to watch the game demo below, then give Odds On Promotions a call today at 888-827-2249 for a free, no-obligation quote or more information and pricing on our Hot Seat Tablet, be sure to email us!

Are you a furniture store looking for fun and exciting sales promotion? What if I told you that you could hold your next upcoming promotion in your own parking lot?  That’s right — just take notes from this California-based furniture store who reached out to me, looking to insure a basketball half-court shot contest on their own turf!

Each day during the furniture store’s two-day sales promotion, a lucky customer was selected to take a half-court shot in the store’s parking lot for a chance to win a brand new outdoor kitchen valued at $10,000, paid for by Odds On!  What’s more?  If both customers ended up making the shot, they both would have been awarded $10,000, making it a $20,000 promotion!  Insuring for multiple winners is always a great idea — not only will it end up costing you less in the end, you’ll never have to end a promotion early, should more than one contestant end up winning — and trust us, despite what the odds of that may seem like, a half-court shot happens.

Of course, if basketball promotions can also be furniture promotions, what else could be insured at your store location?  Whether you’re wanting to insure a different kind of sports promotion (an indoor or outdoor bowling contest or golf putting contest, for example) or even a skills-based promotion such as a paper airplane toss, we can insure it!

Make your furniture promotions unique and think outside of the box — with Odds On’s prize insurance, almost anything is possible so long as it has a risk tied to it!  Just ask us!

Visit our website for a list of furniture promotions, then give Odds On Promotions a call today at 888-827-2249 for a free, no-obligation quote.  You can also email us for more information! 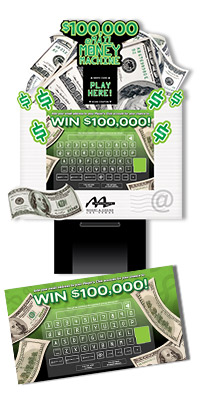 In need of casino promotion ideas for your property? Interested in capturing your players’ email information while giving them a chance to win the big bucks?  Check out Odds On’s new Swipe, Play & Win promotion, eMail Money Machine!

Did you know that 30% of subscribers change email addresses annually? Or that 17% of Americans create a new email address every 6 months? With stats like that, it’s no wonder keeping your player email database up-to-date can be a challenge. That’s why we’ve created the eMail Money Machine! Players simply swipe their club card, enter their email address and check their inbox to see if they have won $100,000, paid for by Odds On!

Give us a call today at 888-827-2249 to obtain a free, no-obligation quote on this promotion from one of our marketing specialists, or email us with any questions!

We at Odds On Promotions are happy to announce that we’ll be insuring a series of giant-prize golf contests during the 24th Annual American Century Championship, which will take place July 16-21, 2013 in Lake Tahoe, California.  Even better – one of the golf contests will be filmed by NBC TV for rebroadcast on Sunday, July 21st, 2013, during the actual tournament!

The first golf contest, developed in conjunction with a New York insurance agency, and sponsored by a PR company, will take place prior to the golf tournament, during their “Media Day” event.  The promotion will feature 40 amateurs who will each get two shots to make a hole-in-one from the par 3 17th hole, which measures 155 yards in length.  That’s a total of 80 chances for someone to become a winner!  A winner of what?  How about a cool $25,000 cash, paid for by Odds On Promotions?

But wait, there are even more golf contests…

To kick off the American Century Championship this year, the same  agency, working in conjunction with Korbel, will be insuring a combination hole in one contest and Ball in the Circle contest.  The contest, which will take place on Friday, July 19 will feature a total of 15 amateur golfers who will each get not one chance, but two chances, to hit a golf ball approximately 155 yards and either make a hole-in-one and win $250,000 or have it come to rest within the designated circle winning $25,000.  The contest, which will also take place on the 17th will be broadcast on NBC on Sunday, July 21, during the actual tournament!

Ready for more?   The third golf contest is a 3-day-long Million Dollar Shootout event, taking place July 19th-21st.  80 amateurs and 1 club professional will get a shot, each day, at winning $1,000,000 if they’re able to ace the par 3 17th hole… which will this time, be measured out at 165 yards.  This hole in one insurance policy will be written so that there can be a possibility of two winners, both of which could potentially cash out one million dollars richer the day of their ace.

Have we piqued your interest?  Want to make your next golf tournament a hit by giving players multiple ways to win big without the risk of payout? Want more information on hole in one insurance or Ball in the Circle contest?  Give us a call today at 888-827-2249 for a free, no-obligation quote!  And don’t forget to tune in this July to watch the American Century Championship!

While the NCAA Basketball Championship has come and gone, I have great news for those of you looking for casino basketball promotion ideas for next year: A few months ago, I helped a casino property in the Southern U.S. to insure an NCAA score prediction promotion!  Feel free to steal…

Here is how the promotion worked –  players who earned at least 25 points on their player’s card during the four days prior to the promotional date were given the opportunity to predict the final score in the April 6th NCAA semi-final game.

Out of all the players participating in the promotion, five ‘finalists’ were chosen via a registration form.  These five players had a chance to win $10,000, paid for by Odds On Promotions, if their game score predictions for each and every team happened to be correct come the day of the semi-final game!

It’s important to remember that score prediction promotions aren’t limited to basketball — you have the freedom to theme your casino promotion around any big event: Super Bowl, The World Series, The Masters … you name it!

Just give Odds On a call today at 888-827-2249 and one of our marketing specialists will provide you with a free, no-obligation quote and any questions you may have about casino sports promotions.

We’re here to help!  For more casino basketball promotion ideas, email us today and we’ll help you come up with a promotion that’s sure to ‘score’ you more foot traffic and coin-in for your casino property!