Looking for ideas on how to ace your golf tournament sponsorship? Well, did you know for as little as $150 you can give golfers the chance to win CARS, TRIPS, BOATS, CASH — ANYTHING, during your next golf tournament?

With hole in one insurance from Hole In One International, you pay a small fee based on the number of golfers in your tournament, the value of the prize you or a sponsor would like to give away, and the yardage of the par 3 hole. Now,
if someone gets a hole in one on the designated hole during your event, your coverage kicks in, and Hole In One International will be there to pay for the prize.

It’s that easy…and just check out a few of our lucky winners!

Even better, when you choose Hole In One International as a hole in one insurance partner for your golf sponsorship, you’ll also receive:

For a free, instant quote visit www.HoleInOneInternational.com/quote or give us a call at 800-827-2249, Monday-Friday, 6am-5pm PST. 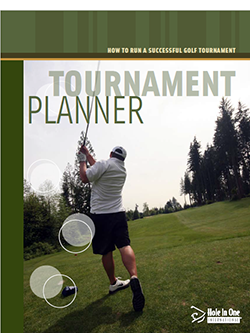 We want you to have your best tournament ever – from protecting your investment in the event of bad weather to helping you raise more money with cost-effective sponsor signage, to offering free resources for planning the perfect golf tournament, shootout, or putting contest.

Check out the links below for more information, or give us a call today to learn more about golf tournament sponsorship. 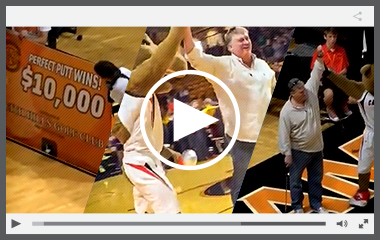 Buies Creek, N.C. — We have a new putting contest winner! At Campbell University, it’s not just the Men’s Golf Team that knows how to sink amazing putts.

This February, Brian Porter of Raleigh nailed an impressive 94-foot putt, winning himself $10,000, courtesy of Campbell University, and paid for by Odds On Promotions.

Porter, who was selected at random during a media time-out break, stated it had been months since he had played golf, and joked that he was, not only “Excited, but, really glad I didn’t have a heart attack”, after realizing that he had sunk the prize winning on-court putt.

Are you interested in giving your customers or fans the heart-pounding thrill of a lifetime? A big prize putt, whether at a golf tournament, store, event, or at your next basketball game, is always a big crowd pleaser.

For more information on running your own big-prize putting contest, email or give us a call today at 888-827-2249.

Looking for an innovative way to drive tune-in? Want to highlight your participation in a golf event or help raise money for a good cause? Give your audience the chance to win big this summer with a 50/50 golf shootout promotion.

This February during the Honda Classic, Fox 29 WFLX gave three lucky viewers the chance to win $500K for themselves and $500K for charity, in a million-dollar Text, Watch and Win Hole In One Contest. Daily during the contest qualification period, viewers were prompted to text a secret word, which was revealed during the morning news, for their chance to win prizes. Lucky finalists not only received a Honda Classic Party 4-pack, they were also entered for a chance to participate in the charity golf shoot-out. While no one aced the shot, the golf shootout promotion was an effective way for the station to maximize its visibility throughout the tournament and engage both station viewers and golf fans. (Check out the station’s on-air prompt and the lucky finalist’s shots at the link below.)

While you may not have a PGA golf event headed to your town, a 50/50 shootout can easily be adapted to highlight your station’s sponsorship or participation in any charity golf event. Or, you can build a similar promotion as part of a sponsorship package for a local golf shop, golf resort or golf course.

Looking for a great fundraising idea that will draw a crowd?  How about insuring a few golf promotions?  That’s what this nonprofit medical center in the state of Kansas did, by insuring a few unique golf shootout contests, with the assistance of not only Odds On Promotions, but our sister company, Hole In One International.

Here’s how the golf promotions worked: Come the day of the golf tournament, 75 of the players, invited via exclusive invitation, participated in a golf shootout contest, where if any of them made a hole in one from the specified 155-yard par 3 hole, they would win $50,000… compliments of Hole In One International.

While unfortunately, no one ended up making the prize shot, there was still good news to be had.  That’s because 20 of the those players were invited to come back and participate in a second golf shoot out contest — this time, from the par 3 18th hole, which measured 165 yards.  The players were qualified in various ways: the 16 golfers who were closest to the pin from the prior shootout contest were invited back, 2 players qualified via auction, 1 via putting contest, and 1 via a chipping contest. 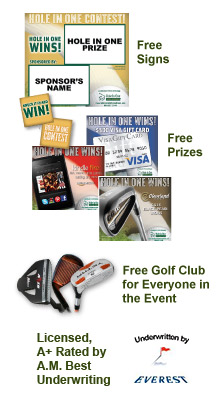 While no golfers managed to make a hole-in-one, money was still raised for the medical center and fun was had by all.  Make your next golf tournament or golf outing a huge success by advertising the chance to win big, compliments of Odds On Promotions!  Want every single player in your tournament to be given a chance to ace a hole and win the big bucks?  Then check out our hole in one insurance!  Give us a call today at 888-827-2249 for a free, no-obligation quote on any golf promotions of your choice… or email us for more information or with any questions you may have!  We’d love to help make your next big fundraising event a success with one of our golf promotions.

We at Odds On Promotions are happy to announce that we’ll be insuring a series of giant-prize golf contests during the 24th Annual American Century Championship, which will take place July 16-21, 2013 in Lake Tahoe, California.  Even better – one of the golf contests will be filmed by NBC TV for rebroadcast on Sunday, July 21st, 2013, during the actual tournament!

The first golf contest, developed in conjunction with a New York insurance agency, and sponsored by a PR company, will take place prior to the golf tournament, during their “Media Day” event.  The promotion will feature 40 amateurs who will each get two shots to make a hole-in-one from the par 3 17th hole, which measures 155 yards in length.  That’s a total of 80 chances for someone to become a winner!  A winner of what?  How about a cool $25,000 cash, paid for by Odds On Promotions?

But wait, there are even more golf contests…

To kick off the American Century Championship this year, the same  agency, working in conjunction with Korbel, will be insuring a combination hole in one contest and Ball in the Circle contest.  The contest, which will take place on Friday, July 19 will feature a total of 15 amateur golfers who will each get not one chance, but two chances, to hit a golf ball approximately 155 yards and either make a hole-in-one and win $250,000 or have it come to rest within the designated circle winning $25,000.  The contest, which will also take place on the 17th will be broadcast on NBC on Sunday, July 21, during the actual tournament!

Ready for more?   The third golf contest is a 3-day-long Million Dollar Shootout event, taking place July 19th-21st.  80 amateurs and 1 club professional will get a shot, each day, at winning $1,000,000 if they’re able to ace the par 3 17th hole… which will this time, be measured out at 165 yards.  This hole in one insurance policy will be written so that there can be a possibility of two winners, both of which could potentially cash out one million dollars richer the day of their ace.

Have we piqued your interest?  Want to make your next golf tournament a hit by giving players multiple ways to win big without the risk of payout? Want more information on hole in one insurance or Ball in the Circle contest?  Give us a call today at 888-827-2249 for a free, no-obligation quote!  And don’t forget to tune in this July to watch the American Century Championship!